This is an excellent article from Martin Fowler.  Follow the links to find out more about him and subsequent parts of this series.

I often help engineering organizations that are in the midst of a
transformation. This is typically both a technology transformation and a
cultural transformation. For example, these organizations might be attempting
to break a core monolithic system into microservices, so that they can have
independent teams and adopt a DevOps approach. They also might want to improve
their agile and product techniques to respond faster to feedback and signals
in the market.

Over and over, these efforts have failed at some point in the
transformation journey. Managers are unhappy with delays and budget overruns,
while technologists struggle to resolve roadblocks from every direction.
Productivity is too low. The teams are paralyzed with a myriad of
dependencies, cognitive overload, and a lack of knowledge in the new
tools/processes. The promises that were made to executive leadership about the
latest technology are not coming to fruition quickly enough.

When we look into these scenarios, a primary reason for the problems is
that the engineering organization has neglected to provide developers with an
effective working environment. While transforming, they have introduced too
many new processes, too many new tools and new technologies, which has led to
increased complexity and added friction in their everyday tasks.

I work with various types of companies. These
could be enterprises that are just at the beginning of their digital
transformation or are halfway there, and companies that have adopted a
DevOps culture from the very beginning. I have found there is a stark contrast of
approach between companies that have high and low developer effectiveness.

The easiest way to explain is via a developer day in the life:

Day in the life in a highly effective environment

The developer is able to make incremental progress in a day, and goes
home happy.

Day in the life in a low effective environment

We could go on. But ultimately the developer doesn’t achieve much,
leaves frustrated and unmotivated

What does being effective mean? As a developer, it is delivering the
maximum value to your customers. It is being able to apply your energy and
innovation in the best ways towards the company’s goals. An effective
environment makes it easy to put useful, high-quality software into
production; and to operate it so that the developers do not have to deal
with unnecessary complexities, frivolous churn or long delays — freeing them
to concentrate on value-adding tasks.

In the example illustrating a low effective environment, everything takes
longer than it should. As a developer, your day is made up of endless
blockers and bureaucracy. It is not just one thing; it is many. This is akin
to death by a 1,000 cuts. Slowly, productivity is destroyed by small
inefficiencies, which have compounding effects. The feeling of inefficiency
spreads throughout the organization beyond just engineering. Engineers end
up feeling helpless; they are unproductive. And worse they accept it, the
way of working becomes an accepted routine defining how development is done.
The developers experience a
learned helplessness.

Whereas in the organization that provides a highly effective environment,
there is a feeling of momentum; everything is easy and efficient, and
developers encounter little friction. They spend more time creating value.
It is this frictionless environment, and the culture that supports it by
fostering the desire and ability to constantly improve, that is the hardest
thing for companies to create when they are doing a digital
transformation.

Being productive motivates developers. Without the friction, they
have time to think creatively and apply themselves

Organizations look for ways to measure developer productivity. The common
anti-pattern is to look at lines of code, feature output or to put too much
focus on trying to spot the underperforming developers. It is better to turn the
conversation around to focus on how the organization is providing an
effective engineering environment. Being productive motivates developers.
Without the friction, they have time to think creatively and apply
themselves. If organizations do not do this, then in my experience the best
engineers will leave. There is no reason for a developer to work in an
ineffective environment when lots of great innovative digital companies are
looking to hire strong technical talent.

Let’s look at an example of a company that has optimized developer effectiveness.

Spotify conducted user research among their engineers to better
understand developer effectiveness. Through this research, they uncovered
two key findings:

Spotify’s developer experience team describes these problems as a
negative flywheel; a vicious cycle where developers are presented with too
many unknowns, forcing them to make many decisions in isolation, which in
turn compounds fragmentation and duplication of efforts, and ultimately
erodes the end-to-end delivery time of products. 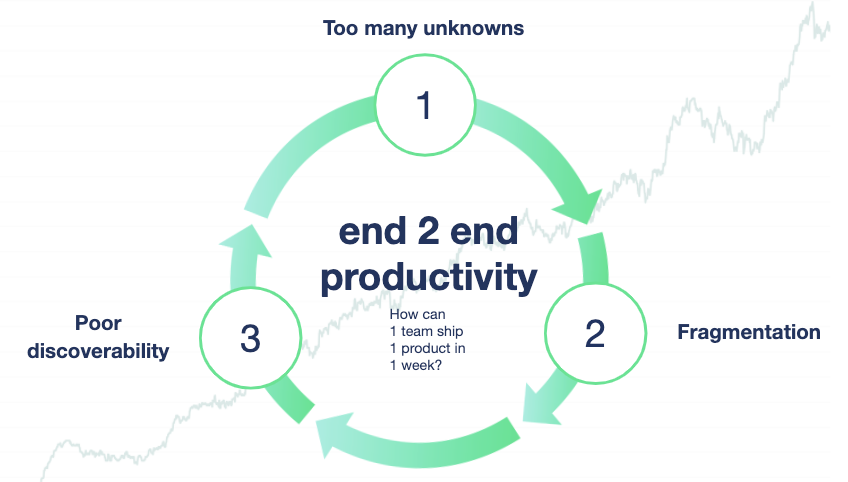 To mitigate these complexities, they developed Backstage, an Open Source developer portal with a plugin
architecture to help expose all infrastructure products in one place, offering a
coherent developer experience and a starting point for engineers to find the
information they need.

How to get started?

What I am describing in the highly effective environment is what it feels
like to work in a company that has fully embraced a DevOps culture,
continuous delivery and product thinking. Very sensibly, most companies are
on a journey towards achieving this environment. They have read Accelerate

and the State of DevOps report. They
know what type of organization they are striving to build. The four key
metrics (lead time, deployment frequency, MTTR and change fail percentage)
are great measures of DevOps performance.

One way to look at the DevOps measures is that they are lagging indicators. They are useful measurements to
understand where you are, and to indicate when there is work to be done to
figure out what tangible things the company should do to get better.
Ideally, we want to identify leading lower level metrics of effectiveness
that are more actionable. There is a correlation to the higher level
metrics. It will ladder up. This should also be combined with other sources
of research such as surveys on developer satisfaction.

There is an overwhelming amount of good advice, practices, tools, and
processes that you should use to improve. It is very hard to know what to
do. My research has shown that there are a number of key developer
feedback loops. I recommend focusing on optimizing these loops, making them
fast and simple. Measure the length of the feedback loop, the constraints,
and the resulting outcome. When new tools and techniques are introduced,
these metrics can clearly show the degree to which developer effectiveness
is improved or at least isn’t worse.

The key loops I have identified are:

The metrics are based on what I have observed is possible. Not every
company needs every feedback loop to be in the high effectiveness bucket,
but they provide concrete goals to guide decision-making. Engineering
organizations should conduct research within their specific context to
figure out what cycles and metrics are important technology strategy.

It is useful to look at what techniques have been applied to optimize the
feedback loops and the journey that companies have taken to get there. Those
case studies can provide many ideas to apply in your own organization.

The diagram above shows a simplified representation of how developers use
feedback loops during development. You can see that the developer validates
their work is meeting the specifications and expected standards at multiple
points along the way. The key observations to note are:

When organizations fail to achieve these results, the problems are
quickly compounded. There is a great deal of wasted effort for the
developers. Embodied in the time spent waiting, searching, or trying to
understand results. It adds up, causing significant delays in product
development, which will manifest as lower scores in the four key metrics
(particularly deployment frequency and lead time).

From what I have observed, you have to nail the basics, the things that
developers do 10, 100 or 200 times a day. I call them micro-feedback loops.
This could be running a unit test while fixing a bug. It could be seeing a
code change reflected in your local environment or development environments.
It could be refreshing data in your environment. Developers, if empowered,
will naturally optimize, but often I find the micro-feedback loops have been
neglected. These loops are intentionally short, so you end up dealing with
some very small time increments.

It is hard to explain to management why we have to focus on such small
problems. Why do we have to invest time to optimize a compile stage with a
two minute runtime to instead take only 15 seconds? This might be a lot of
work, perhaps requiring a system to be decoupled into independent
components. It is much easier to understand optimizing something that is
taking two days as something worth taking on.

Those two minutes can add up quickly, and could top 100 minutes a day.
These small pauses are opportunities to lose context and focus. They are
long enough for a developer to get distracted, decide to open an email or go
and get a coffee, so that now they are distracted and out of their state of
flow, there is research that indicates it can
take up to 23 minutes to get back into the state of flow and return to high
productivity. I am not suggesting that engineers should not take breaks and
clear their head occasionally! But they should do that intentionally, not
enforced by the environment.

In reality, developers will compensate by filling these moments of
inactivity with useful things. They might have two tasks going on and toggle
between them. They might slow their compile frequency by batching up
changes. In my research both of these will lead to a delay in integration of
code, and development time.

How far do you take optimizing? When is enough? Imagine that now we have
that change down to 15 seconds, but we think we can get it to three
seconds. Is that worth the investment? It depends on how difficult it is to
make that change and the impact it will bring. If you can develop a tool or
capability that will speed up 10 teams then it might be worth it. This is
where platform thinking, rather than optimizing for individual teams, comes
into play.

Distributed systems are a particular challenge. There are many valid
reasons for splitting systems into different deployable units (usually
microservices). However, distributed systems also make many things difficult
(see Microservice
Prerequisites), including developer effectiveness. Sometimes teams
might optimize for team autonomy or for runtime performance, but they sacrifice
developer effectiveness because they do not invest in maintaining fast
feedback loops. This is a very common situation my company runs into.

We’re releasing this article in installments. The next installment will
look at the steps to improve these feedback loops and the lessons Etsy learned from
focusing on developer effectiveness

To find out when we publish the next installment subscribe to the
site’s
RSS feed, or
Martin’s twitter stream

Rob is a founder of, and frequent contributor to, Develpreneur. This includes the Building Better Developers podcast. He is also a lifetime learner as a developer, designer, and manager of software solutions. Rob is the founder of RB Consulting and has managed to author a book about his family experiences and a few about becoming a better developer. In his free time, he stays busy raising five children (although they have grown into adults). When he has a chance to breathe, he is on the ice playing hockey to relax or working on his ballroom dance skills. View all posts by Rob Broadhead